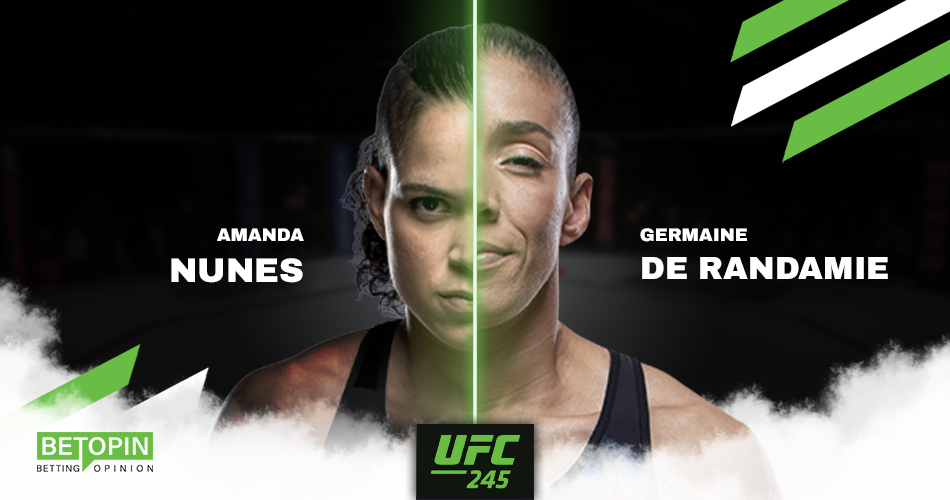 The co-main event of UFC 245 sees Amanda Nunes defend her UFC Bantamweight Title against Germaine de Randamie. A rematch of a UFC fight way back in 2013 this fight promises to be exciting and full of incident. In truth though and with no disrespect to de Randamie, this co-main event is all about Nunes, the best female fighter in UFC history and now a firm fan favourite.

Since 2013 Nunes career in the sport has grown from strength to strength to where she is now the most dominant and feared female fighter ever in the history for the sport. She currently holds the Bantamweight title and the Featherweight title becoming the first woman in UFC history to hold two belts at the same time. Since her last defeat, she is on a nine-fight win streak beating the whose who of top female fighters along the way. Holly Holm, Ronda Rousey, Valentina Shevchenko have all fallen to Nunes and many times is vicious fashion. Her striking ability is second to none in the women’s divisions and she has many women in the UFC running scared. Nunes through the years since 2013 has become the face of women’s MMA taking the place of all who stood before her to become the top talent in the women divisions.

Germaine de Randamie is no slouch either, however. She is currently on a five-fight win streak herself and hasn’t lost in the UFC since her defeat to Nunes. She had become the UFC women featherweight champion during this time but was stripped of the belt due to UFC politics. She is a veteran of combat sports holding a 9-3 record in mixed martial arts and retiring from kickboxing as undefeated before she entered MMA. She possesses a typical Dutch kickboxing style and has notable victories in the UFC over the likes of Holly Holm and Raquel Pennington. Having dropped down a division after being stripped of the featherweight belt she now faces Nunes in their rematch as a bantamweight fighter.

Nunes will be looking to continue to ride her hot streak and further enhance her claims as a genuine UFC Hall of Famer. She has taken women’s mixed martial arts to new levels with her skill and exciting knockouts, while de Randamie will try to avenge her loss to Nunes and achieve the upset of the year.

Currently, there are no betting prices on the usual online bookmaker sites, but when they are available, I can see Amanda Nunes being a heavy and deserved favourite. It would be a major upset to see de Randamie win this fight. Although riding high herself and not tasting defeat since 2013, Nunes is a different beast to face compared to the other women in the UFC. She has high-level skills on the feet, in the clinch and on the ground. She is ferocious and lives up to her nickname of the Lioness. When she smells blood she usually finishes her fights, she holds an 18-4 record currently with 13 of these victories being by knockout. She swarms opponents finishing them with scary combinations and accuracy to her strikes. The great Cris Cyborg (many thought she was unbeatable) found this out when Nunes was an underdog for one fight. Cyborg suffered the same fate as many others, knocked out cold.

Nunes should be and will be a heavy favourite and will win this fight by knockout.

Not sure on how to bet on MMA? Fear not, we have you coved. Simply click here and you will be an MMA betting expert in no time.

This will be a first-round knockout victory for Amanda Nunes. I see the fight going no other way. She is a ferocious striker and goes for the kill in every fight. I suggest coupling the bet as a knockout in round one for Nunes. In her last 6 fights, she has won 4 in the very first round and 3 of those were knockouts. This is a superb bet.

They are spoiling us at UFC 245 with two belts up for grabs. With it being the last big pay per view event of the year it was always going to be a big one. The return of Max Holloway to defend his featherweight belt is an exciting fight as he loved by the fans. Some other intriguing contests with up and coming star Sergio Pettis on the card and fan favourite and veteran Matt Brown.