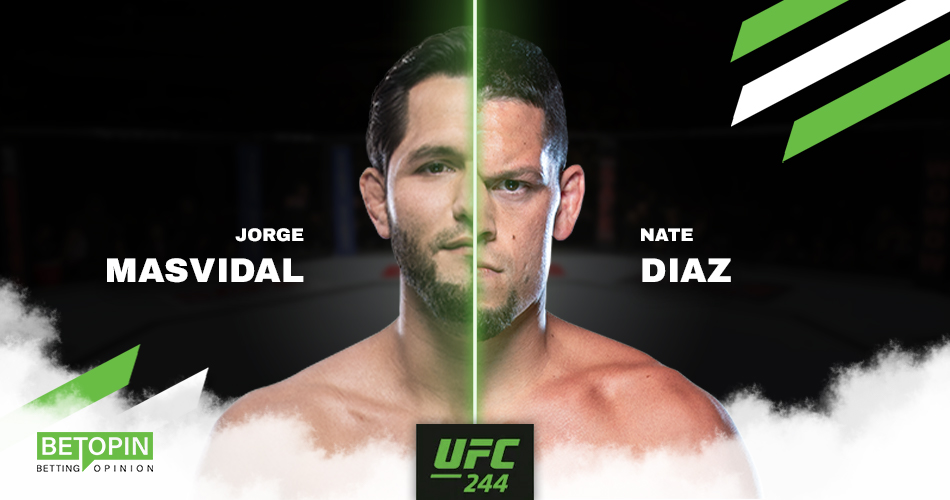 Jorge Masvidal has run through 2019 like a freight train in the UFC’s middleweight division. He has knocked out who many thought was the ‘new thing’ in the UFC in Darren Till, followed this by hitting Leon Edwards backstage with his one, two and the can of soda and finally defeated Ben Askren with a five-second knockout that shook the world of mixed martial arts and firmly put Masvidal in the mind of all the fans of the sport.

Nate Diaz, on the other hand, hadn’t been sighted in the UFC for three years. After his fights with Conor McGregor Diaz felt he deserved to be paid like the top fighters and held out from negotiations until he got what he wanted. He returned with a superb victory over former champ Anthony Pettis after which he mentioned Masvidal as a person he would like a fight. Two self-proclaimed gangsters Diaz believes him and Masvidal are the only two real gangsters left in the UFC and wants to see who is the baddest on the planet.

Dana White the UFC president loved the idea, the fans screamed for the fight to be made and both sides agreed to the UFC 244 main event. As a build-up to the fight, there is no real animosity between the two fighters. Both fighters respect each other greatly and that was clear to see between the two at the recent press conference. They both remarked they just want to hurt each other; they know each will bring out the best in the other and they are looking forward to the test. Add to this that the UFC is making a belt for the fight – The Baddest Motherfucker Belt – this fight would seem to have it all for fans. It may be a five-round war or it may be a quick knockout or submission, anything is possible. A superb fight is in the works for UFC 244.

According to the odds with Paddy Power Jorge Masvidal is a 1/2 favourite over Nate Diaz who is priced up at 6/4 to take the victory. It is a tough fight to call and is a pick it on the day type of fight. Both men have lost their fair share of fights throughout their careers so a loss isn’t something foreign to either. Through their battles, however, they are tried and tested and these two are true UFC veterans. The fight may be cagey at times as it would seem the winner will get a title shot going forward, a big deal for both fighters.

This fight will be a five-round main event and don’t be surprised if the fight goes the full five rounds. Both fighters are capable of knockouts and submissions with many on both their cv’s throughout their UFC careers, but I think this one will be a five-row back and forth war. Bloodied and battered by the end both fighters will no that they have been in a fight for the ages. One of the best bets for this fight I feel will be for the fight to be the fight of the night. Also, either fighter to win by decision is the bet that interests me most.

Nate Diaz career is starting to take off and he is on an upward curve whatever the result but I see Jorge Masvidal edging this particular fight and getting the next title shot.

If you are still finding it hard to grasp MMA betting then click here where all will be explained.

Jorge Masvidal to win a decision is the pick for this UFC 244 main event.

A string of solid fights on the UFC 244 card with fan favourites like Andrei Arlovski and Stephen Thompson trying to get victories to put them back in the mix in their respective divisions. Arlovski is a veteran and a UFC stalwart so his fight is not to be missed. Stephen Thompson has some of the best striking and unorthodox skills in the UFC so another great fight to look forward too. UFC 244 is shaping up to be a cracking card.

To bet on any of the UFC 244 undercard then waste no time and click here for the best odds.