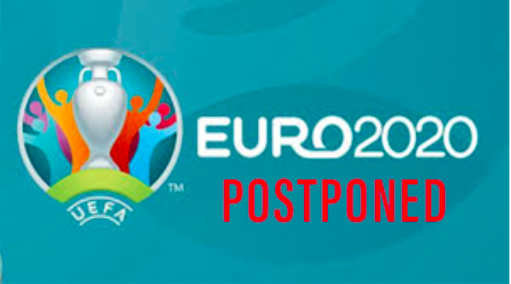 So, at the time of writing Ireland has just followed many other countries in Europe’s lead and all but declared a lockdown of the country to try to combat the coronavirus crisis that since the middle of February has gripped the European member states. The Covid – 19 pandemics has swept across the globe and turned life as we know it on its head. Business’ are closed, people out of work, people aren’t allowed leave their homes and in turn that has led to basically all sporting events to be postponed or cancelled until further notice.

One of the first major events to announce a change was one of footballs biggest tournament, Euro 2020 which will still be called Euro 2020 but will be held in 2021.

It is an unprecedented time with unprecedented things occurring so it was no surprise that UEFA took this decision and did so quite early in the outbreak in Europe. Since then the virus has snowballed in Europe and it is now obvious the Euros could never have time to run this year. It will now take place from the 11th June 2021 to the 11th July 2021 in the same 12 host nations as already announced. For domestic and European club competitions to finish their seasons this year it was the only real sensible option on the table for UEFA.

Changing it to next year means the competition will still go ahead but it will benefit some nations and hinder others. Teams like Belgium have a talented but ageing squad, another year on their legs might work against them, while England can now count themselves lucky as star striker Harry Kane will be back from injury and young players like Sterling, Rice and Alexander Arnold have now another year of growth before they play in such a massive tournament.

As of now, there are teams yet to qualify for Euro 2020 with playoffs to be played, I feel that of these teams none will have an impact on the competition in the long run. With the tournament now delayed a year, it is sure to suit a number of teams, the ones I feel will benefit the most from this postponement are;

England is a very young side in terms of age but they have some very experienced heads in the dressing room. Their young players will benefit greatly from another year of experience in their domestic leagues and international friendlies. Young talented players like Jadon Sancho, Marcus Rashford and Alexander – Arnold will be a further year into their development. If the tournament was held this Summer, Harry Kane, England’s main striker would be injured and there are questions about Rashford’s fitness as well. All this really benefits England and seen as they came fourth in the 2018 World Cup all signs point to England making a strong challenge in Euro 2020.

Check out the latest odds for England here.

Consistently a team that has been at the top of World and European football throughout their history, Italy might be a left-field call but I think they will be there challenging for honours in Euro 2020 and the postponement for a year will help their cause.

Italy qualified for the Euros with ten wins from ten games, after having failed to qualify for World Cup 2018 they are well and truly back in business. A mix of youthful exuberance and old heads make Italy a tough team to beat. Another year for their young players is a help, while how the pandemic has affected Italy as a whole will inspire these players. Players like Verrati, Insigne and Bernardeschi will be fun to watch next year. Italy has suffered greatly throughout the Covid – 19 battle and the Italian players are proud and will want to win this tournament to give their countrymen and women something to celebrate. It will be quite some sight to see the Italian fans next year when the virus has been defeated and sport is back in full tilt.

Check out the latest odds for Italy here.

A couple of teams are towards the end of their current crop of players, they will not benefit from the year postponement. Teams like Croatia and France have had a lot of success over the last eight or so years and their time is finite but the team that will struggle the post waiting till 2021 is Belgium.

Belgium has long promised to win a major tournament, many times over the last ten years favourites or near the top of the betting with the bookies for major tournaments. They are loaded with talented players – Eden Hazard, Kevin de Bruyne, Romelu Lukaku, Dries Mertens, Thibaut Courtois just to name a few. World Cup 2018 it finally looked like Belgium was going to put it all together on the big day and win a tournament. Once again though they failed, loosing in the semi-final and eventually finishing in third place.

The problem for Belgium though isn’t the talent they possess it’s their age. A lot of their top players will be past 30 years old when the tournament starts and they haven’t got many star young players coming through. The likes of Hazard and de Bruyne will be over 30 in 2021 and have many miles on their legs already. The time is now for Belgium and a year wait will count against them.

No doubts through their star-studded line up will be amongst the favourites for the rearranged Euro 2020.

Check out the latest odds for Belgium here.