Euro 2020 Playoff Finals – All You Need to Know 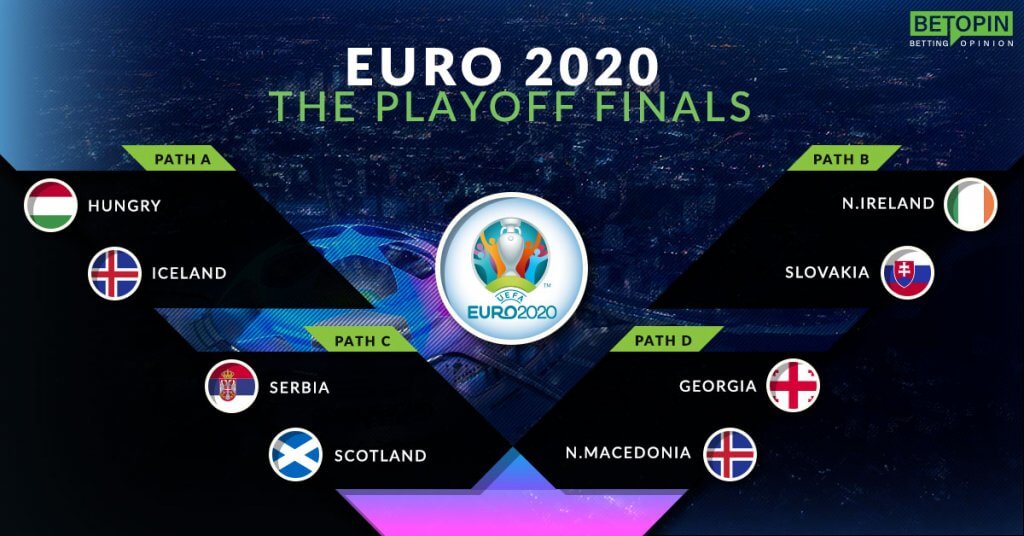 What is the Play-Offs

With the growth of football betting as a whole throughout the world, there are now a lot more teams competing at the international level. This is seen to a massive extent in Europe. The Euros is a competition for the best team in Europe every four years and requires qualification to the final tournament.

With more countries competing for a place in one of sports and football top competitions and no extra places up for grabs, the Euro Play-Offs have added a bot of spice to the Euros. Sixteen teams have been battling it out for four remaining spots that are open for Euro 2020. It is a new look part of the Euros and when it is complete we will know the 24 finalists and the full set of group fixtures.

Fixtures were determined in November 2019 but with the Covid-19 pandemic the Euros was canceled till the summer of 2021 and the fixtures were delayed. Following on from a decision by UEFA the European Qualifiers Semi-Finals took place on October 8th and the final games will take place on 12th November. The remaining fixtures are as follows –

Are the Playoffs new?

In some formats, there would have been playoffs for the last 6 installments of the Euros. The first one was a one-off match between the Netherlands and Ireland in 1996. The 2020 version is very different though, it is the first time teams have had to come through more than one qualifying round. Teams have also qualified for the UEFA Nations League.

The playoff teams were determined through the results from the UEFA Nations League and the original qualifiers to the Euros from that competition.

After the Semi-Final rounds in October, we have been left with 8 teams and four games to determine the remaining places for the spots left in the rearranged Euro 2020 Finals.

Hungary enters this game in better form than its opponents Iceland. They come into this fixture on the back of three wins in their last five games and just the single defeat against a decent Russian side while Iceland has lost four of their last five and are not in great form on the international scene. The match will be played on Thursday 12 November in the Puskas Arena in Budapest Hungary at 7.45 pm British/Irish time.

Although Hungary enters the game in better form, Iceland has the better pedigree for qualifying for competitions over the last few years and has become a fan favorite for those watching on TV with their never say die attitude and the ‘Icelandic Clap’ celebration. Iceland will be hoping their talisman Gylfi Sigurdsson can propel them into the Euro 2020/2021 Finals next Summer.

Betting has the game close with Hungary favorites at 8/5 and Iceland priced at 15/8.

Scotland has been flying in their last five games, four wins a draw have them in super form for this playoff game. Although ranked 15 places higher than Scotland in the world rankings at 30, Serbia has been hit and miss in their last few games. A couple of losses and draws and one win tell that story. Head to head between the teams is split down the middle. In 10 meetings there have been 2 wins each and 6 draws.

The game is to be played in Serbia at the Stadion Rajko Mitic in Belgrade on 12th November at 7.45 Irish time and because of this Serbia are heavy favorites at around the 8/13 mark. Scotland represents real value though at 5/1 or thereabouts. They are in great form and full of self-belief.

A bit of a pick-em type game as both teams haven’t been in great form over their last five. Both teams reached this phase through a penalty shoot-out and it seems sure to be a tight game. They are separated by a mere four places in the world rankings also and the betting tells the story of this game with Northern Ireland slight favorites at 13/8 and Slovakia at 2/1. Slovakia over the years has a better international record but maybe this is Northern Ireland’s time to shine. They might be able to do it for their small nation and army of fans. The game is scheduled to be played in Windsor Park Belfast Thursday 12th November at 7.45 Irish time.

A battle between two of the newer nations to enter the Euros over the last fee competitions. They have played each other twice before with two draws being the result. Their last five games have been quite similar also with no losses and quite a few draws for both sides. It’s a very tight game and this is obvious from the betting with Georgia at 15/8 and North Macedonia at 9/5.
The match is to be played at the Dinamo Arena in Tbilisi Georgia and this just might sway it in the favor of Georgia. A very hard game to pick though, however.

Bet £10 get £10
T&C’s Apply
#ad
Claim Offer
LV Bet Review
You’ll need to make a min deposit £10 and wager the same amount (or more) on any sporting event with the minimum odds of 3/4. Before you receive the £10 in bonus money, the qualifying bet must be settled.
4.6

100% Match Bonus on your first Deposit
T&C’s Apply
#ad
Claim Offer
Sport Nation Review
No under 18’s A minimum deposit of £20 is needed in order to claim the bonus. The Bonus will be subject to a wagering requirement.
4.6