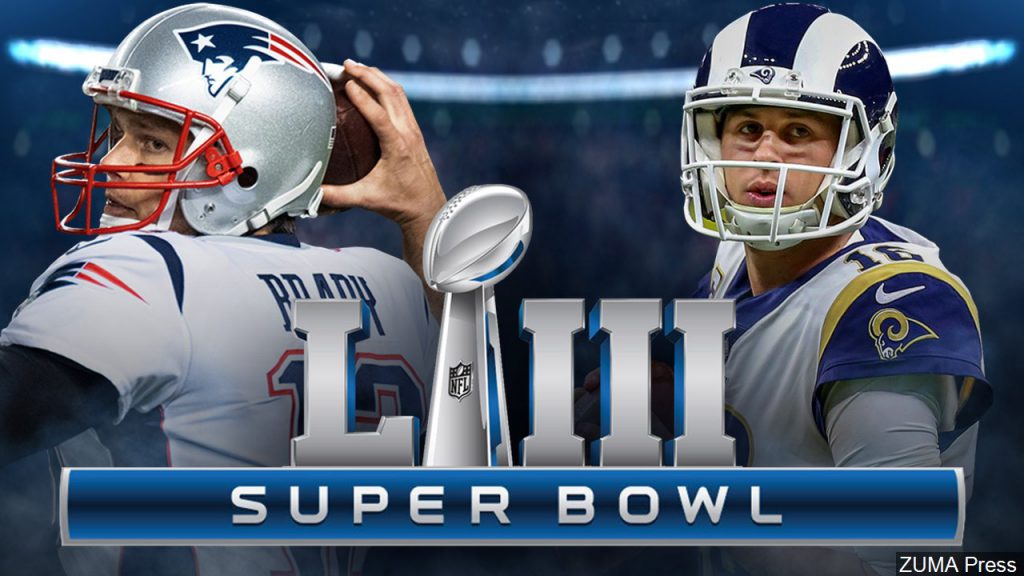 After months of first downs, interceptions and touchdowns, we now know the two teams who will be battling it out in the Mercedes-Benz Stadium come February 3rd. Whist the New England Patriots and the L.A Rams were both fancied to make the playoffs, as the game weeks rolled on this Super Bowl matchup looked increasingly unlikely.

Going into the play offs no one really gave the Patriots a chance of reaching the Super Bowl, but Tom Brady stepped up to do what he does best and picked apart teams to get the ball rolling. The New England Patriots swept aside The Chargers by 41-28, while the Rams edged out The Eagles by 6 points with a score of 20-14.

The Pats and the Kansas City Chiefs fought out an epic battle in the final playoff game. The two teams could not be separated over the 4 quarters and it came down to over time, and up stepped the G.O.A.T to play his beloved Pats into yet another super bowl final with a final score of 37-30.

On February 3rd all the controversy will be forgotten from the playoffs when the Patriots and the Ram’s come head to head in what has all the ingredients to go down as one of the all-time great Super Bowls.

The Rams are down as the home side which means the Patriots will be able to don their famous white uniform. If you are one for superstition, then this could be a good omen for you.

The New England Patriots with Bill Belichick and Tom Brady on their side are 3 from 4 when donning the white uniform, taking the scalps of the Philadelphia Eagles, Seattle Seahawks and the Atlanta Falcons while dressed in white. The one team to defat them while in white was last season champions the Philadelphia Eagles.

When kick-off time comes around on February 3rd, it will be 17 years to the day when Tom Brady and Bill Belichick captured their first Super Bowl. In doing so they turned over the hot favorites in the St Louis Rams in a titanic battle. The game finished with a last gasp field goal when Patriots kicker Adam Vinatieri slotted over the most important kick of his life to seal victory by 3 points in a score line of 20-17.

If this season’s super bowl is to be decided in over time, the Ram’s will be hoping beyond hope that they win the toss because Tom Brady is 3-0 in play off over time when having the ball.

Though, no matter who you’re betting on in the Super Bowl when that final whistle is blown, we will be witnessing history. We will either see Tom Brady add another to his collection and cementing his name into Super Bowl history or if the Rams are to upset the party then we will see the Ram’s head coach Sean McVay become the youngest coach ever to lead his team to Super Bowl glory.

New England have been written off since the beginning of the season. People have said they were on the decline and this is the worst Patriots team of the Belichick era. Still they end up as a 2.5 point spread favorite playing for the Lombardi Trophy at the end of the season. They have got stronger as the season has progressed, the defense is playing at an elite level and things just seem to be clicking for the Patriots in all phases of the game.

When all is said and done, I think we will see the New England Patriots collect yet another Vince Lombardi trophy. What it boils down to is that we are getting Bill Belichick and Tom Brady at less than a converted field goal favorites against Sean McVay and Jared Goff. Don’t get me wrong, I think McVay is a world class coach, but his is taking on the Alpha that is Bill Belichick. In seasons to come I can see McVay become the new Alpha of the NFL, but for now I think he must wait just that bit longer.

New England will hold the edge in the quarterback area. I think they will have a very good game plan for Goff. It is still unclear if Todd Gurley is nursing an injury or whether they are just riding the hot hand last week with C.J Anderson. New England held the Chiefs to 41 rushing yards in their last game and the Chargers to 19 rushing yards the game before. I think the Patriots will try force Goff to try best them through the air, but I am yet to be convinced that Goff is capable of that. Since Cooper Kupp picked up his back injury in week 10 the Rams haven’t looked the same. Belichick has really reminded us of how good his defensive mind is so far in the playoffs. Let’s not forget he was a defensive coordinator for five years with the Giants back in 1985-1990.

The slight concern that I have, and it’s only a slight one, is that only one Super Bowl champion has finished with a losing record on the road. The Patriots finished with a record of 4-5 picking up defeats at the Lions, Titans, Steelers, Dolphins and Jaguars. The NFC have won 14 of the last 18 Super Bowls that have been played under a dome. But I come back with the superstitious white uniform. New England are 12 from 13 when donning the famous white uniform, so there are positives to take from both sides.

Let’s look into what matters, the points total, which is currently set at 57.0 and that is the biggest opening total in Super Bowl history. When I first saw this, I thought that’s too high, but if you delve into the data you might start to like it a bit more. The Patriots have not allowed a sack all post season and rank top when it comes to sacks allowed, while the Rams are down in 5th when it comes to sacks allowed. Though, the Rams were the second highest scoring team in the NFL at 32.4 and New England close behind in 4th with a 28.6 average. This game is indoors in a dome on artificial turf and the over is 5-1 in the last six Super Bowls played on artificial turf. For those looking for an in-play angle, 8/10 Super Bowls with totals of 50+ have finished the first quarter with 10 points or less and all six have gone under the first half total. Look to back the over in-play at potentially a very low number if this one gets off to a slow, nervy start.

Our final Super Bowl 53 bet is Phillip Dorsett to score a touchdown at 3/1. He’s scored three TD’s in his last three games. With a lot of the attention being focused around Gronk, Edelman and Michel, New England like to spread the ball around to different receivers and he looks like a good bit of value at 3/1 in what should be a high scoring affair.

Aideen O.
Obsessed with the sport and bet relates, Aideen is responsible for the editorial direction of Betopin and has covered sports for more than 15 years. He became editor-in-chief of the site in 2013. Aideen specializes in covering all things sports & casinos, having reviewed dozens of sportsbooks and casinos. Aideen was previously reviews editor at other sports sites, and his work has appeared in Important sports portals. Email: aidee[email protected] 40 Patrick St, Waterford, X91 X3KF. 353-653-83514
Top