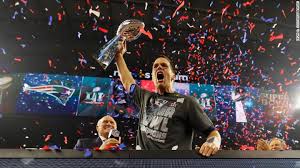 While the world of sport is closed down due to the madness of this Corona Virus out-break the NFL offseason has fully kicked into gear and player movement between teams is in full flow. Some huge deals have already happened with DeAndre Hopkins being traded to the Cardinals from the Texans and Philip Rivers signing a one-year deal with the Colts to make a run at a championship. However, no news is as big as Tom Brady going to the Tampa Bay Buccaneers. It filtered through yesterday and has shocked the NFL world and straight away put Tampa Bay back on the map as a legit contender for the title next year. In a heartfelt social media message to all the Patriot fans, Tom explained his reason for leaving. 20 years, 6 Super Bowl rings and 41 playoff start since 2001 leaving behind a hall of fame career in New England like no other Quarterback have ever had.

Things though weren’t right over the last few years in New England and that has led to his departure. Patriots Coach Bill Belichick has a tendency to move on from ageing players even if they are still somewhat in their prime. Three years ago, he tried to move on from a then number 1 QB in Brady for the next in line Jimmy Garoppolo. Since then the relationship has been strained between the two but neither would openly say due to the high level of respect between both parties.

Why Leave The Patriots Now?

As a free agent, Brady wanted guarantees in this contract. He has consistently stated he wants to play till he is 45 which is 3 more years. New England wasn’t willing to go year to year in contracts. Also, the money in the end talks. Tampa Bay apparently are offering 30 Million a year to Tom Brady who many times has taken less than his fair share to help New England build a roster worthy of competing, it’s a big change for Tom and a well-deserved payday. The bitterness between Brady and Belichick will also have been an issue when Belichick tried to force Brady out it never sat well with him. As well as that both player and coach have never won a Super Bowl without the other – both wanted to prove they do not need the other and now they get their chance.

Why the Tampa Bay Buccaneers?

Brady was linked with quite a few teams over the course of this process. It looked more likely for him to end up with the Titans or the Raiders. Those teams made their own moves though and it looked as if Brady was staying put in New England. Then came Tampa Bay.

At first glance, it was a bit of a shock but when you delve further into this move it makes a lot of sense for the Buccaneers and for Brady personally. Tom felt his options offensively were limited in New England over the last couple of years. Behind the scenes, he constantly called for better weapons to through too and a running back to carry the load. The offensive line was poor also which led to Brady’s stats to decline badly last year.

The Buccaneers thought has not one but two Pro Bowl wide receivers in Chris Godwin and Mike Evans. Both are legitimate number one receivers on a team and they are paying together. Their offensive line ranked number 10 of 32 last year, one of the best at protecting the QB. They have two young studs in Cameron Brate and OJ Howard playing at the tight end positions, Brady loves using his tight ends in offensive schemes. They have a decent level rushing attack which will surely improve with Tom Brady throwing to quality receivers and opening up the ground game. Their defence is solid and they have a great coach in Bruce Arians. In all the Buccaneers are a great fit for Brady and the weather in Florida will be a lot better than New England also.

Will the Buccaneers Contend?

In short yes, the Buccaneers can and will contend next season. They had a solid season last year and offensively are a great team. Even an ageing Tom Brady is a huge upgrade on their current QB Jameis Winston. Winston is too careless with the football and throws too many interceptions leaving other teams to get back into the games they are winning or drawing. Brady will right this wrong. The NFC South Division is staked with talent though, The Falcons, Saints and Panthers are all good and exciting teams so this division should be exciting to watch all season long.

Next year the Super Bowl is scheduled to take place in Tampa Bay, who would bet against Brady having a home field Super Bowl appearance in his 21st season in the league, it might just happen if Psycho Tom shows up all season long!