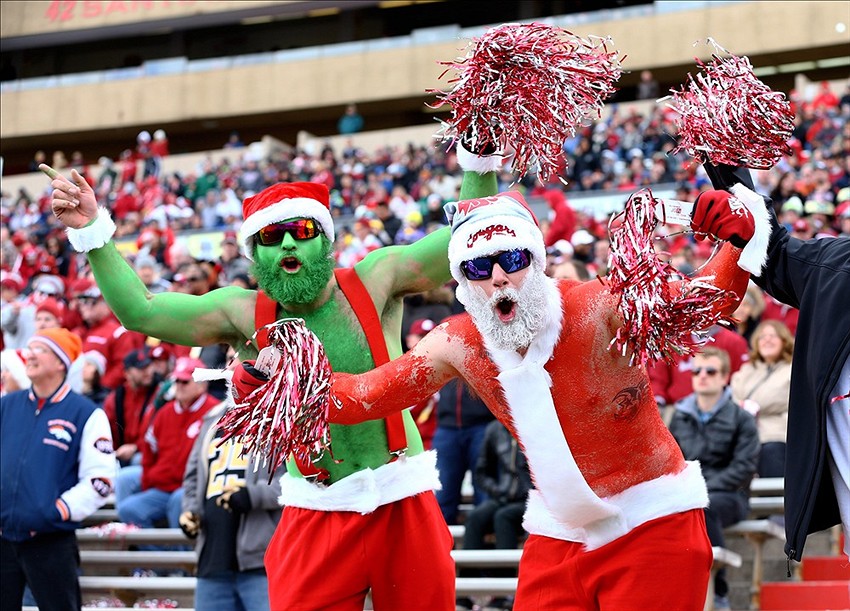 The majority of us can’t wait until we see the back of 2020, but then there is the sports fan inside us all that was waiting for this day to arrive where we can sit back, relax and bet on all the sport on TV.

As always there is an array of sports coming over the festive period and with so many highlights to choose from, we have taken the best sports action coming over Christmas 2020 to get you in the Christmas spirit and make your holidays memorable and hopefully a profitable one with your favorite sportsbook.

If you are a sports fan you cannot think of Christmas without thinking of the football bonanza that happens over the festive period. Each year we look forward to sitting down on Boxing/St Stephens Day without leftover Christmas dinner and getting stuck into Premier League fixtures.

As always you might decide to have a nice bet on the fixtures with some betting tips that you might come across on the day.

But the way the fixtures have fallen this season we are in for some early Christmas treats. So, lets highlight some of the top fixtures that we have to look forward to from now up to the end of the Christmas holidays.

One of the most famous derby’s takes place on December 12th as Man Utd look to continue their upward trajectory in the Premier League, where Man City will look to get down their Manchester rivals and overtake them in the league standings.

The clash of the top two in the Premier League – Jose v Klopp – Keane v Sala – Son v Mané. This game doesn’t need to much hype to get you in the mood to sit back and enjoy the attacking talent that comes with Liverpool, against the tactical prowess of Tottenham under José Mourinho.

Liverpool will have to be at their brilliant best to break down the stubborn Spurs, but I for one am looking forward to seeing the outcome of this tactical masterclass.

This for one is a huge game that is likely to decide the faith of Arsenal’s season. Under Mikel Arteta, Arsenal looked to be turning a corner, but a few weeks is a long time in football. At the time of writing (Dec 8th) Arsenal now see themselves sitting 15th in the league with only one win in their last five, which includes three losses. This is a huge game for Arsenal and Mikel Arteta.

But, for Everton, they look to be building a team that is capable of challenging for minimum Europa League this season, but with Carlo Ancelotti steering the ship, this is a very exciting time to be an Everton fan as he could be the key to bringing the good times back to the Everton

Will be looking at a rejuvenated Arsenal or will they come into this huge London derby on the back of a disappointing result? If they come here feeling sorry for themselves, well then Frank Lampards Chelsea will take care of them and brush them aside like they have done to many a team this season.

Arsenal will need to bring their A-game to keep a top-class and young Chelsea team at bay on Boxing Day.

A fixture with a lot of history and memorable matches between these two clubs. Liverpool is the current Premier League Champions while Newcastle is more in and out than the washing on a showery April day.

But with that said a trip to Newcastle for Liverpool is never short of drama, and I expect more of the same here.

What is Christmas without the array of top-class horse racing from Ireland and the UK?

As you know over Christmas we are so lucky to have the best of the best go against each other over the festive period. Over the years some of the best performances in living memory were on display around the Christmas holidays. Some that stick out are Kauto Star winning his 5th Grade 1 King George VI Chase at Kempton beating the previous year’s winner and at the time reigning Cheltenham Gold Cup winner, Long Run – Faugheen at the age of 11 winning the Grade 1 Matchbook Novice Chase at Limerick, where the roars from the crowd will never be forgotten as he cleared the last. Some say they could be heard all over Ireland.

But who could forget the ride that Ruby Walsh gave the enigma that is Tidal Bay to get up in the shadow of the finishing line to win the 2012 Lexus Chase at Leopardstown, beating First Lieutenant, Flemenstar and Sir Des Champs.

Let’s hope we get more of the same with these top-class horse-racing fixtures and get some horse racing tips along the way.

Let’s hope with all these top class come with some top-class performances.

Last but not least, what is Christmas without the Darts? For many households, the PDC World Darts Championships are synonymous with Christmas.

Every evening on the lead up to the final, you just finish dinner, and you sit back, hit up your favorite betting exchange, strap yourself in for hours of entertainment as the best players in the world go head-to-head in the pursuit to become the next PDC World Darts Champion.

Even if you are not a darts fan you will always get drawn into the magic and atmosphere that comes with the World Championships.

Many a great TV moment has been created in the Alexandra Palace, from some of the biggest comebacks in recent history – historic 9 dart finishes to some of the most nail-biting matches every, and one that stands out for dart fans and non-dart fans is Phil ‘The Power’ Taylor v Raymond ‘Barney’ Van Barneveld in the 2007 PDC World Darts Championship Final. It had it all, drama, pressure, and an out and out classic that was finished in a sudden-death deciding leg on x20 by ‘Barney’ as he took his first PDC World Darts Championship.

2020 might have been one of the worst years in living memory, but let’s finish it on a high and enjoy what sport has to offer us and our family’s over this festive period.

So, from all of us at Betopin, we want to wish you a merry and safe Christmas.